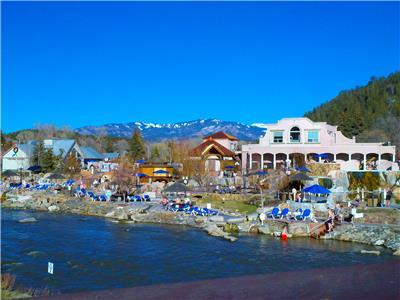 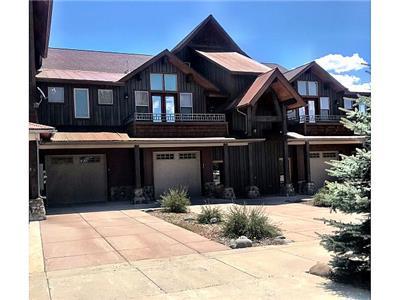 Luxury Riverwalk Townhome Overlooking The River, Walking distance to town, shops, Hot Springs, Restaurants, etc…Only 20 Minutes to Wolf Creek Ski Area! Fishing and river rafting right out your back door! This is an air conditioned unit, private, gorgeous interior and everything you could need for your home away from home. 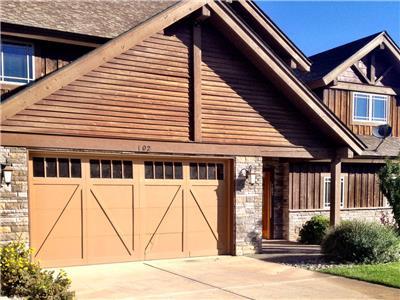 Step into this quality townhome with all the amenities you need t make your stay enjoyable and at ease. Walk to all central core area of Pagosa lakes. 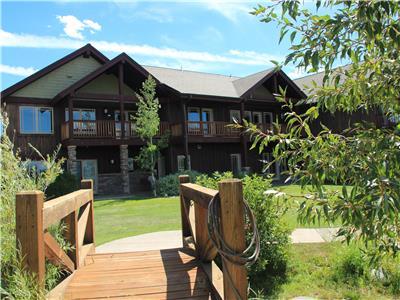 Step into this luxury townhome in Pagosa Springs, Co. We offer all the amenities to make your stay more enjoyable and at ease.

When the first white men came across the Great Pagosa Hot Spring over 150 years ago, they noticed the ground around the pool to be packed by human foot prints with paths radiating out from the 75 foot diameter bubbling pool like spokes from the hub of a wheel. Native American’s had been enjoying the waters of this natural hot mineral spring for generations before others found the special waters.

The ancient native legend about the discovery of The Spring tells of a plague which devastated the tribe and thwarted the concoctions and powers of the Medicine Men. A plea to the gods was in order and the tribe gathered along the banks of the San Juan River to participate in prayer ceremonies and fire dances. They worshipped, prayed and danced until they all fell asleep from exhaustion. The next morning they awoke to the sounds of bubbling water coming from beneath the coals of their burned out ceremonial fires. They saw this as the gods’ answer to their prayers and began to bath their sick bodies with the warm water. Suddenly their affliction was cured! They called the cauldron..Pag-Osah."Healing Waters", and the great Spring became a sacred place of peace and healing,

The medicinal effects of the water was studied by U.S. Army physicians in the 1860’s and their reports concluded: "The waters of Pagosa are without doubt the most wonderful and beneficial in medicinal effects that have ever been discovered."

As the news spread and the area became more inhabited by the Army, railroad crews, and settlers, the first bath house was erected in 1881, four years after Pagosa was designated a township by the U.S. Government. As rail travel reached Pagosa in 1900, travelers came from far and wide to "take the waters". Then, with the advent of new advances in medicine, health seeking travel began to wane. Rail service to Pagosa ceased in 1936. Not until the 1950’s did "new motels" begin to be erected for the driving public seeking the waters again.

The present Standard wing of The Springs Resort was part of the original "motel" and was called The Spring Inn. The most famous visitors to the Inn were John Wayne during his filming of the movie THE COWBOYS and World War II hero Maj. Jimmy Doolittle, of Doolittle’s Raid on Tokyo.

The "motel" went out of business by the late 1980’s and new owners purchased the property in the early 1990’s. The Inn had 4 plastic tubs for soaking, which were corroded and could only be filled with a garden hose. But, the health-seeking movement was about to begin anew in the ’90’s and the world-class resort that is today’s Springs Resort was beginning to take shape. The current owners, Nerissa Whittington and Keely Reyes, continue to make improvements and additions to this magical resort.

Capt. J. N. Macombs, U. S. Army Surveyor and the first white man to write about The Spring, entered into his journal."There can scarcely be a more beautiful place on the face of the earth." He also predicted in his writings that the area around the Great Spring would some day "become a place of great resort". A visit to The Springs Resort today is proof positive of Captain Macombs’ vision and great gift of prophecy.